Couple Saves Cat from Shelter, the Kitty Holds onto Them and Won't Let – KingdomOfCats

A couple from North Carolina rescued a cat from a shelter. The kitty was so happy to have a home that he cuddled his human with both of his paws and didn't want to let go. 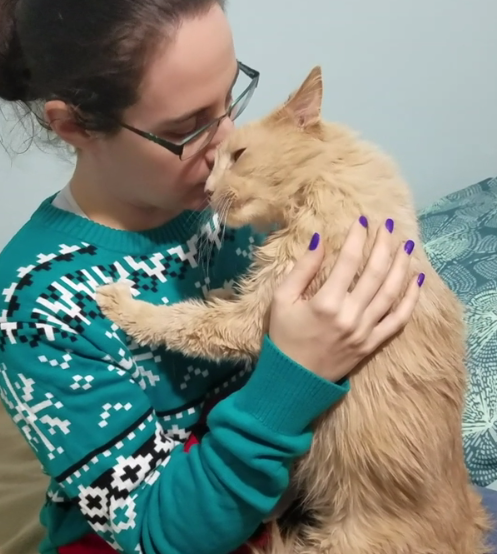 Dan and his wife Hannah were contacted by a volunteer of Chesapeake Cats and Dogs, a rescue in Maryland, about a cat needing immediate fostering.

The 9-year-old cat who had been surrendered to a shelter in North Carolina was in poor health. "I took the afternoon off work and drove an hour to get him," Dan told us.

The cat was very shy when they brought him out to meet Dan. "Obviously, he had been neglected. He let out a meow that sounded like 'no' when he was to be put in the cat carrier for me to bring him home."

To help calm him, Dan talked to him the whole ride home. "I told him I was going to get him all better and all cleaned up. I pet him as best as I could through the cat carrier bars," Dan added. The couple turned their guest bedroom into the kitty's very own suite. They brushed him and he seemed to love it. After giving him medication to ease his pain, he began to purr and it went on for a long time.

"We would spend as much time as possible brushing and petting him the first few hours. We got him calm enough to remove his fur mats and get his fur smooth." After a good brushing, he clutched onto his human with his paws and didn't want them to go. They named him Huggs. "I pulled him as a foster and knew the minute I met him that I was keeping him," Dan said.

Watch Huggs in this adorable video:

Huggs came with many health issues, but after he moved into his new home, things began to improve.

"He had a full tooth extraction shortly after we got him, and has been doing great since. He's got some chronic issues, but plays with the other cats, eats well, and is generally happy," Dan said. For the first time in a while, he is pain-free and demands constant affection.

They bought a baby Bjorn for Huggs so he could be close to them at all times. "When I come home from work at night he literally walks up to me at the door and puts his paws up on me, asking to be picked up," Dan told us.

"I'll then walk around the house with him purring like crazy and rubbing against my chin. He sleeps on the bed with us too, and will wake you up by purring in your ear." 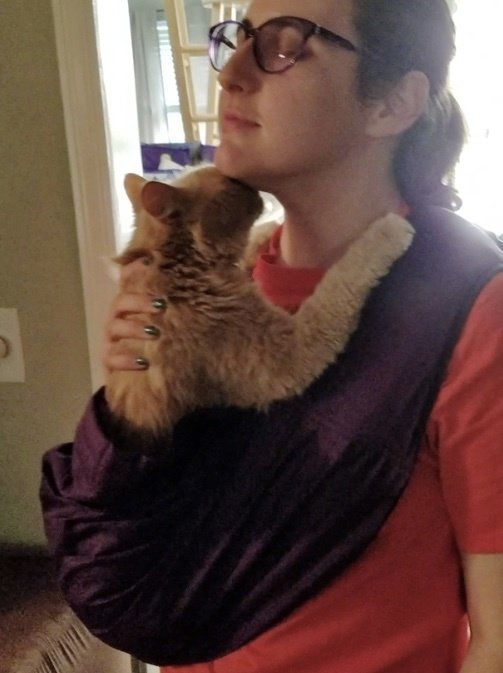 It's been a few months since they rescued Huggs. The sweet ginger boy is the happiest he's ever been.

"His scabs and signs of fleas are all gone, he gets along with the other cats, and his health is good and stable." They don't know what life had been like before they found each other at the shelter, but they know that the rest of his life will be filled with lots of love and cuddles. Relate Story: Cat Refuses To Eat After Human Dad Surrendered Him To The Shelter For A New Couch